There are many possible reasons why the current generation cannot let go – some are valid reasons and others are grounded in the emotional connection to the business and uncertainty about their next chapter in life.

Therefore, notwithstanding emotional implications of transitioning the business, if those in the current generation have little confidence (founded or unfounded) in the next generation AND the majority  of their financial stability is tied to the business, it will be nearly impossible for them to let go.

So what can the next generation do to foster an environment  which encourages the current generation to embrace the succession process despite the inherent challenges? What often needs to occur is a shift from negative attitudes that discourage succession, to positive ones which support succession.

Next Generation Strategies to Support Succession 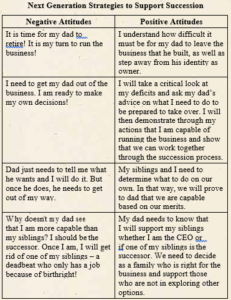